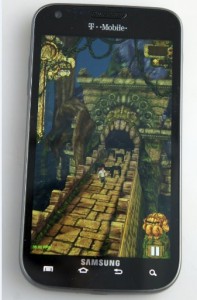 Even if you aren’t an iOS fan (I’m not) you’ve probably heard of Temple Run. Temple Run is very addictive, once you get your hands on it you can’t stop. You flick your finger to left or right at the as you come to an intersection to make sharp turns, flick up to jump over obstacles and flick down to slide under threats. Meanwhile, you can also tilt their device to move the character left and right along the pathway to collect coins, late redeemable for powerups and new characters. When players fail to quickly react to incoming obstacles, such as tree branches and fire traps, they’re knocked down and attacked by the demon guardians who are closely and always trailing players.

Developers at Image Studios are hoping to get in on the game for a full release by the end of the month, it’s likely not going to happen this week. If you have an iOS device you should try it out, it’s free on the app store and hopefully by the time you can’t stop playing, it will be out for the android market.