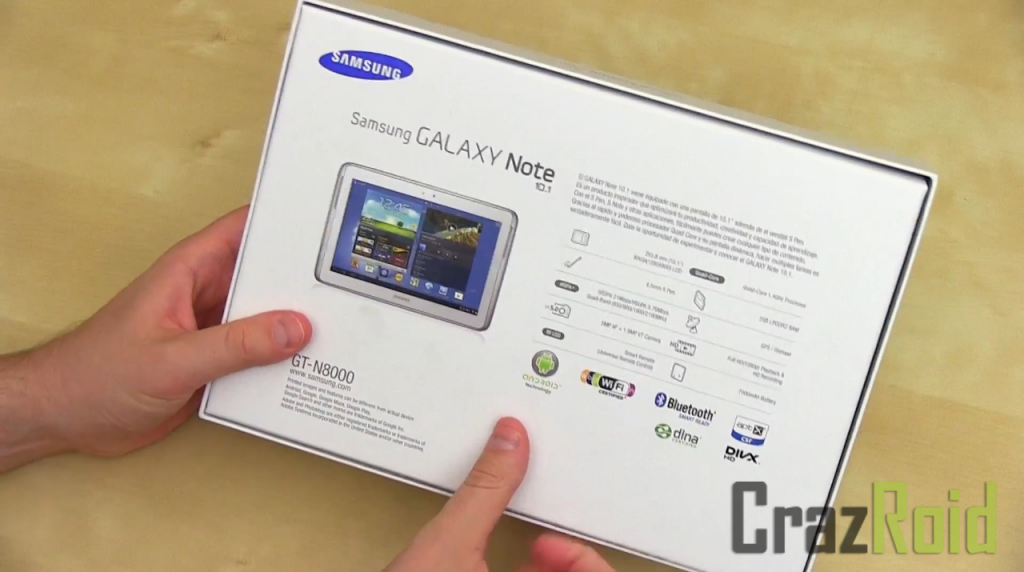 The first time we saw the Galaxy Note 10.1 was at Mobile World Congress in Barcelona with only a dual-core processor and no definite release date. Since then, Samsung went back to the drawing board and prepared a tablet that we could actually look forward too. Five months after MWC Samsung has released a tablet with the company’s first quad-core processor and impressive specs and features.

Since the tablet was introduced at Mobile World Congress in Barcelona, the Galaxy Note’s specs have changed. Six months ago, Samsung said that the Note 10.1 would pack a dual-core CPU and 1GB of memory, and have internal storage of up to 64GB. For its final release, though, Samsung has bumped the Note 10.1’s processor to a quad-core Samsung Exynos with 2GB of system memory, making it the first  tablet I’ve tested with that much RAM. Gone is the 64GB internal storage option; instead, the Note 10.1 comes in 16GB ($499) and 32GB ($549) versions, expandable by up to 64GB via MicroSD card.

CrazRoid was able to get a demo unit about a week ago and since then Web Ninja has been carrying the device around testing its every feature. Today, we are able to provide you with a review of the Samsung Galaxy Note 10.1.

The tablet has a 10.1 inch screen and is very similar to the Galaxy Tab 2 10.1 except for a long cavity in the tablet’s upper right corner for the included S Pen fits into. 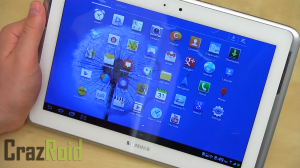 The tablet is slim (8.89mm), light (1.31 lb.) and better than the iPad 3rd Generation (aren’t all Android’s?). The iPad weighs in at 1.44 pounds and has a 9.4mm depth.  When both tablets are held, the Note is noticeable lighter and somewhat slimmer.

One of the key selling points for most 10.1 inch tablets is movie playback, and it’s fine to use one hand if you’re going watch a feature length film. It’s comfortable to hold in one hand while you grip the S-Pen in the other (as long as you’re not holding in one hand for more than 1/2 hour), though the edges could do with a bit of softening.

The Galaxy Note 10.1  feels solid, with a sturdy frame clawing the white flimsy plastic providing a small amount of premium feel. The tablet comes in both black and white. In the middle of the silver plastic bezel sits the 10.1-inch display, featuring the same 1280×800 (WXGA), putting it inline with the iPad 2 in terms of clarity and brightness. Samsung probably could’ve upgraded the display to compete with the new iPad. They had the time to upgrade the display to 1920 x 1200, yet they didn’t. 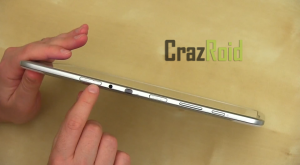 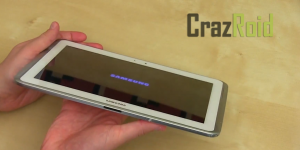 The bottom of the tablet features Samsung’s 30 pin dock connector, microphone pinhole, and on the bottom corner – the S-Pen holster/holder.

The tablet will come in both Wi-Fi and 3G configurations (with an 4G LTE version coming later this year). The cellular versions will include a SIM card slot next to the headphone jack.

Two 2-inch-long speakers stretch vertically along the left and right bezel. Although the sound is slightly tinny and distorted at high volumes the speakers deliver sound to your face therefore providing a better audio experience than other tablets.]

The Galaxy Note 10.1 trades in the Tab 2 10.1’s front VGA camera for a 1.9-megapixel shooter and upgrades the 3-megapixel rear camera on the Tab 2 10.1 to a 5-megapixel camera with 1080p support and LED light. Disappointingly, there is no  HDMI option on the device, requiring you to purchase an additional accessory if you have plans to connect the tablet to a TV or monitor (dock connector).

The 1.9 megapixel front facing camera is top of the line for tablets. Normally, we see a VGA camera in tablets and you can see the difference with the 1.9 when video chatting and taking face pics. The 5 megapixel camera on the the back of the tablet takes okay shots they seemed somewhat blurry, softly lit and filtered.The video quality was just the same as the still-shots. Yes it’s HD, but the video has the same blurry, filtered image quality and also appears  to have a lack of image stabilization. Our audio, for the most part, was distinct, if a tad muffled, but then again we happened to catch a reprieve from the crush of surrounding traffic.]

The Galaxy Note 10.1 has a 7,000 mAh battery and Samsung promises 8 hours of battery life. I noticed that the Galaxy Note 10.1 does indeed last a few day with normal usage (casual browsing, streaming video consumption, social media monitoring and brief photo-taking).

The Galaxy Note 10.1 has Android 4.0 ICS pre-installed which is somewhat disappointing considering the Nexus 7 with Android 4.1 Jelly Bean.  We’re faced with a skinned version, now bumped to 4.0.4 and predictably cloaked in Samsung’s TouchWiz UX. The TouchWiz Overlay isn’t for light for those Android Purists out there. The pop-up utility launcher that runs along the bottom of the screen was annoying because it was easy to launch accidentally. The device is stocked up with 21 pre-loaded apps — Kno, Barnes & Noble Nook, Netflix, Peel Smart Remote and Dropbox, just to name a few. Samsung assures us an upgrade to Android 4.1 will arrive sometime this year, so expect more concrete news on that front in the coming months. I found the experience to be quite smooth and the multiscreen feature was enticing. 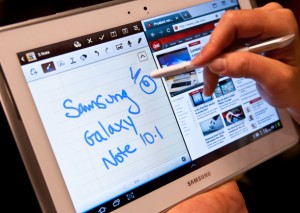 You can choose from six apps — S Note, Gallery, Video, Browser, Polaris Office and Email. But the multitasking fun doesn’t end there: power users can load a pop-up video player on the upper half of the screen, call up various of mini apps from an onscreen shortcut or drag and drop clipboard content from the browser or Gallery to S Note and Polaris Office. During our testing, we launched as many as eight apps simultaneously, which appeared to have no detrimental effect on video playback and only slightly hampered the slate’s overall response time. In real-world usage, you’d be hard-pressed to find a scenario where such extreme multitasking is even necessary, and we suspect that workhorse potential will satisfy even the most discerning power users.] 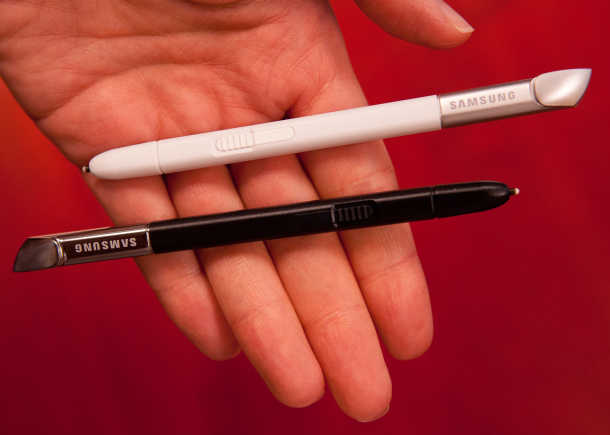 In the picture above, the original S Pen from the Galaxy Tab 10.1 and 7.0 is on the bottom while the new S-Pen is on the top. The S Pen functionality allows user to directly draw on the screen, similar to the experience on the current Galaxy Note. Due to the S Pen’s use of pressure sensitivity (256 levels), user will have the ability to take precise notes, draw detailed pictures and scribble down ideas on a whim. Basically, it mimics the pen/paper combo that may one day disappear. The  S-Pen still feels as light as a feather and it might sound like a good thing, but you’d be surprised. Like the tablet itself, the pen conveys an inferior and ultimately disposable feel. For what it’s worth, there’s a well placed function button located on the side of the pen that’s easy to find with your finger. If that’s not impressive enough, Samsung will sell two additional pens — one with an eraser tip and the other a larger holster for a more natural grip.

As you soon as  remove the stylus from its in-shell holder, a vertical mini-menu slides out from the screen’s right edge displaying five optimized applications and a settings option. This shortcuts toolbar can is customizable in that you can have a certain app open when you remove the pen from its slot. Right now, only five applications are designed to take specific advantage of this functionality: S Note, S Planner, Crayon Physics, Photoshop Touch and Polaris Office. And, as with the Galaxy Note phone, the S-Pen can also be used to take screenshots (just long-press the function button while touching the pen to the screen).

Granted, the Samsung Galaxy Note 10.1 lacks screen resolution, battery life, and solid feel that some other Top-Tier tablets have, specifically the Acer Iconia Tab A700, Apple iPad, and Asus Transformer Pad Infinity TF700—have at the same or lesser price. Samsung’s extra features help lessen the sting of this omission somewhat, but the difference is clear, particularly with text-heavy content.
But, when you factor in the handy stowaway S Pen and Samsung’s pen-optimized software, and suddenly the Note 10.1 gets an edge all its own. Throw in the Galaxy Note 10.1 Wi-Fi tablet’s solid performance, and the Note 10.1 is squarely back in the mix.