The Samsung Galaxy S4 smartphone is Samsung’s latest flagship phone. The international version of the device features a Exynos 5 Octa 5410 chip, while its US version features a Qualcomm Snapdragon 600 APQ8064T chip. Both smartphones run on the latest version of Android, Android 4.2.2 Jelly Bean, and sports a 5-inch Super AMOLED capacitive touchscreen with 1080 x 1920 resolution and a pixel density of 441 ppi, protected by Corning Gorilla Glass 3.

How To Get A Free Samsung Galaxy S4 (US only)

If you live in the United States and you’re over the age of 18 years (19 years if you live in Alabama or Nebraska, and 21 years if you live in Mississippi), you quality for a chance to win yourself a Galaxy S4 smartphone straight from Samsung. All that you are required to do is fill out a simple form on Samsung’s official website and hit the submit button. Make sure to read contest’s terms of conditions before participating in the competition, since it includes a privacy policy and what they do with your information. 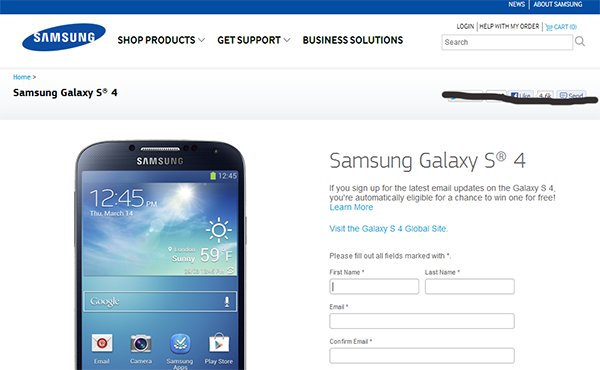 Samsung will be giving away 52 Samsung Galaxy S4 smartphones (no data plan or service required – the phone is free if you win it), and four 55-inch Samsung Smart TVs. The contest ends on April 22th, 2013. For more information about the contest, check out Samsung’s website (the link is above – you have to be blind to miss it).

How To Get A Free Samsung Galaxy S4 (International)

It looks like Samsung is not the only one giving away a free Galaxy S4 smartphone. Android Authority, a popular Android blog, is also giving the device away, however, it’s not limited to only United States citizens. The downside is, they’re only giving away one smartphone, not over 50 devices like Samsung. 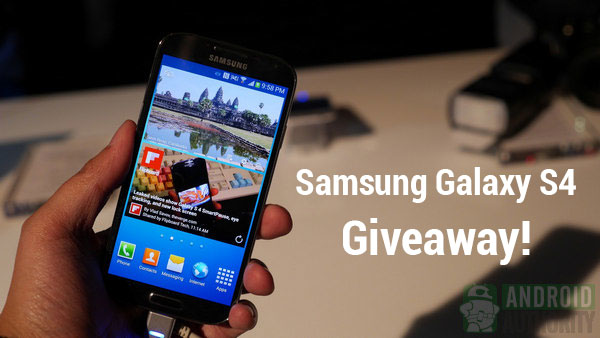 How to win? – you might ask. It’s simple. Just leave a reply in the commenting section of the contest post. The staff of Android Authority will randomly select a comment that was published in the post, and announce the person that made the selected comment as the winner of the contest.