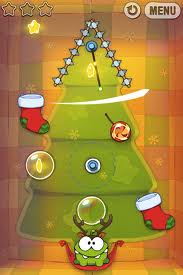 Who would have thought that cutting ropes would be so much fun but when it comes to Cut The Rope, it really is fun.
Cut The Rope is a mind boggling puzzle game by ZeptoLabs. In this game you have to feed a little cute-but-hungry monster known as “Om Nom”. Only thing between the candy and little Om Nom is a rope [there will be more ropes and different obstacles on different levels]. You have to slice the ropes, dodge the obstacles and make sure that candy reaches Om Nom’s belly safely.

Cut The Rope might seem like an easy puzzle game. But let me warn you, only the first few levels will be easy and after that the game gets pretty intense. Some levels can be really annoying.

The gameplay is simple all you have to do is slice some ropes by swiping your fingers but it is not just about cutting the ropes. There are many other obstacles like bubbles [can be popped by tapping on them], Spiders [Cut the ropes before spiders reach your candy] and Spikes [Simply destroys the candy if it comes in contact with it].

The game has a nice physics puzzle in it. You will have to figure out the correct physics-algorithm before cutting the rope, one wrong move and there goes the candy out of the box. You have to make sure that you slice the ropes when it is in the correct angle, and will land exactly where you want it to [Usually Om Nom’s belly]. Bubbles will help you lift the candy upwards, but don’t let them take the candy out of the box. There are also Air Pumps [or whatever you want to call them], tapping on a air pump will move your candy in the respective direction. Different levels have different obstacles and physics, so make sure that you figure out the correct strategy before making your move.

The game has 10 Worlds [More to come] and each world comprises of 25 levels. You have to collect stars at each level to unlock new Worlds. You can also unlock achievements and share your score on the online leaderboards via ScoreLoop.

Not much to talk about the control because Cut The Rope has simple touch controls. It also supports multi touch, so you can cut two ropes at the same time with two fingers. The controls are pretty similar to other popular touch-based games like Angry Birds, Fruit Ninja etc Most of the time, you just need one finger [only a few levels require you to use two fingers and cut two or more ropes at the same time]

I personally think that all newbies will find the controls pretty simple and easy to understand. All you need is perfect timing and some physics knowledge.

I love the graphics of this game. Om Nom looks super cute, specially when he does the feed me animation.  If you drop the candy, or miss the target, you will also notice him getting sad [You won’t like it though]. All levels have nice visuals and clean environments. You can also change the sweet from a candy to donut or a cupcake, whatever you like [or should I say whatever Om Nom likes].

Cut The Rope has a nice background tone. Om Nom also has sweet sound effects when he gulps the candy. Other than that each world has a unique background sound that keeps you hooked to the game. The audio is really impressive and adds to the overall experience.

On the final note I would like to add that Cut The Rope is a must have game for every puzzle lover out there.  If you are a true puzzle fan, an you can beat any game that has a physics based puzzle in it then you must download Cut The Rope.This game will surely make its place in your Top 5 games. It is highly addictive by the way, and you will be hooked to it for a really long time.