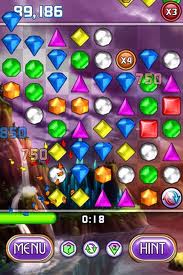 There is no doubt that Tetris was the best puzzle game ever, but EA released Bejeweled as a sequel to the biggest puzzle game. Bejeweled itself became a hit in its genre. Now, EA has released another sequel to Bejeweled on almost every platform. Bejeweled 2 continues the puzzle legacy created by its predecessors.
Bejeweled 2 is pretty much same like the original title, it has the same simple gameplay and shiny visuals. It is the most popular puzzle game after Tetris. It is now available on almost every mobile platform.

Bejeweled 2 has the similar gameplay like the original “Bejeweled”. It has the most simple and straightforward gameplay. You have to match three similar gems. When you match a row of three more more similar gems, they will disappear and new gems will fall down. You can also create chain combos, intentionally or unintentionally to score more points. If you match more than three gems, you will get a power gem that will destroy all nearby gems. If you match 5 gems than you will get a hyper cube that will destroy all similar colored gems. The gameplay is simple and fun. It is one of the best match-three games out there.
There are three game modes in Bejeweled 2, Classic, endless mode and Action [timed] mode. Classic mode is similar to the original game. In Endless mode you can play without worrying about running out of time or moves, you can play as long as you want. While in Action [timed] mode you have a given amount of time and you have to complete the level before the time runs out. You can save your game at any point and start playing from that point again. The main objective of the game is to score as higher as you can. Well, the disappointing thing as that you can not share your score online. Bejeweled 2 does not have Online Leaderboards.

Controls are absolutely newbie friendly. All you have to do is swipe your finger through to gems to swap their places. The touch is excellent and responsive. There is no lag whatsoever during the gameplay. Works smoothly on all capacitive screens. Touch based controls are much faster than PC or console controls, you can quickly touch the gems and swap their places. Saves a lot of time when playing when you have only a little time left.

Bejeweled has the most stunning graphics you will ever see on a puzzle matching game. Developers have worked really hard on this one. It has noticeably improved in graphics. It has much better graphics than the original “Bejeweled”. The flashes and explosions of gems look pretty amazing. Gems look excellent with stunning shine and vibrant colors. You will definitely love the extra work done on the graphics of this game.

Audio is as great as the game itself. The game packs beautiful background music that has an acoustic touch to it. Sounds effects are also worth mentioning, explosion sounds are brilliantly done. You will definitely enjoy the sounds during the game. Game’s jaunty music will enhance your gameplay experience and keep you immersed in the game.